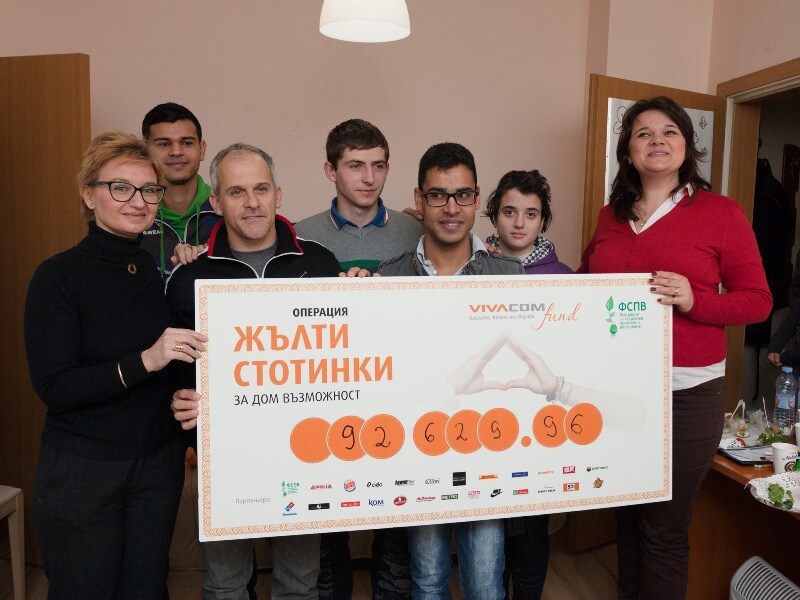 VIVACOM’s (Bulgaria’s largest mobile phone operator) 2016 “Yellow Coins” campaign collected 92,629.96 lev for the work of FSCI, including support from over 35 business and media partners. The campaign also received the personal endorsement of the legendary former Olympians Jordan Jovchev and Beloslava – they became ambassadors for the campaign, attracting thousands of people to its cause. The funds raised will be used to create a new House of Opportunity.

At the age of 18, adolescents, who grew up in institutions or foster care, need to find a new home. Many simply have no place to go. FSCI gives them a new home through its House of Opportunity Programme (HOP). These family-type homes provide safe places for young people, helping them to learn to live independently and adapt to life after state or foster care. Specialist staff at each HOP support the young people – helping them to work through their individual development plans, continue their education or search for employment.

VIVACOM’s “Yellow Coins” campaign has been supporting HOP for three years. Thanks to donations, received from the public and businesses by the campaign in 2014 and 2015, the number of HOPs, provided by FSCI, has grown to five, with two in Sofia and one each in Gabrovo, Burgas and Ruse. The funds raised from the campaign in 2016 will be invested in the creation of another HOP in the city of Varna.

“Yellow Coins” is a national donation campaign and was created by VIVACOM Fund in 2010. The funds are raised in VIVACOM shops and partner outlets and through text giving– providing for a highly accessible campaign. VIVACOM matches the amount of money donated through its stores and each partner also contributes further to the cause.

FSCI would like to say a big, big thank you to VIVACOM and its partners and to the public, who have been so generous in their support for this year’s Yellow Coins appeal!