How Moni ended up sleeping rough in Prague

By FSCINovember 1, 2017April 12th, 2021House of Opportunity, Stories
No Comments

This will be Moni’s third stay in the House of Opportunity. He calls us every time he gets in trouble. The last time Moni left the Programme was about a year and a half ago. 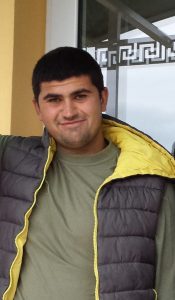 During his time away from us, Moni learnt some valuable and hard lessons. He has twice been abroad in the Czech Republic. The first time was a success. However, the second time, he trusted people who turned out to be fraudsters who scammed him. Moni was part of a group of workers who had all been “recruited” by the same group of people, but when they arrived at the train station in Prague, no-one was waiting for them.  They waited for two days at the railway station trying to contact the organisers but no-one turned up and, eventually, everyone went their own way. “Those who had money went back home to Bulgaria,” Moni says, “but I was not prepared for this and had to stay in Prague by myself.” And so Prague’s railway station became Moni’s home for nearly a month. During the day he would be looking for a job so he could buy some food and at night he would sleep rough at the station. He met many people, among them many Bulgarians, who he describes as the “local mafia” – “they are people who have different criminal schemes to trick people and don’t care about the damage they cause.” Moni tried everything – from harvesting garlic to all sorts of heavy physical work. But no matter how hard he tried to turn this journey into a success, it just didn’t happen. After a few weeks of misery and hardship, Moni called a lorry driving friend, who was able to give him a lift home.

Today, only a few months after his experience in the Czech Republic, Moni clearly sees his mistakes and advises everyone: “Don’t believe everything you see on the internet, double check everything and don’t let yourself be misled like I was since it was really hard and bad.”

Together with the team at the House of Opportunity, Moni is already making plans for his future – evening school, work and new real friends.