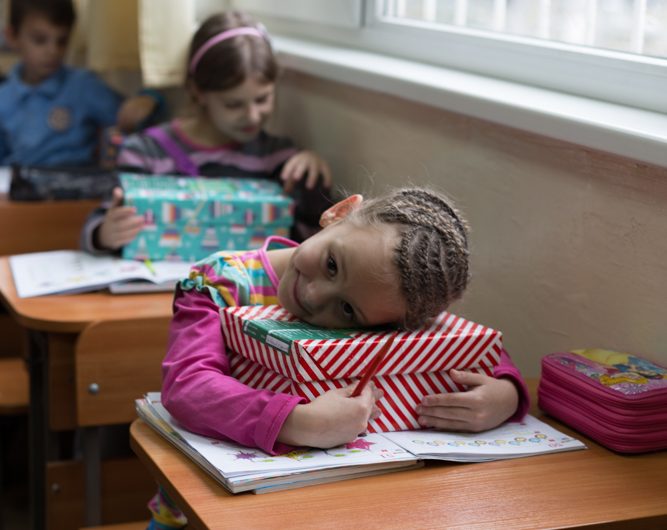 Thousands of children and families received Christmas presents as a result of the generosity of our UK supporters last year. In total 11,480 Christmas boxes were donated with 9,224 boxes going to Bulgaria and 2,256 to Serbia.

FSCI distributed boxes throughout Bulgaria and in Serbia a team from our partners, Center Star, gave out the presents in Belgrade and in Eastern Serbia, around Niš. Places visited included children’s institutions, kindergartens and schools in poor rural and urban areas, senior citizens homes, Roma communities, protected homes and refugee centres.

Teodora Koleva, Director of FSCI Bulgaria, is in no doubt about the importance of the project. “On the one hand, this symbolises the gift that mankind has received on Christmas day. At the same time, we show these people who live on the periphery of society, often forgotten and overlooked, that we think of them and believe in them. At Christmas it is important to be good – with our loved ones and acquaintances, and even with people we do not know, with people who need support”.

In the UK over 700 people gave their time to help sort and pack the boxes. Rich Parsons, the project leader, was amazed by the number of people who gave their time. “We were near overwhelmed by the turnout to some of our sorting sessions. On some nights we had over 100 people come to help – it got to the point where we couldn’t fit any more volunteers into the building! We’re so thankful to everyone who donated a box or gave their time to help out. We’ve had a fantastic response again from our supporters and their efforts have made a lot of children and families very happy.”

In Bulgaria the number of volunteers giving their time on the project is growing year on year too. “This year we had 50 people come to help unload the truck in Sofia, which was good because the storage facility was on the second floor, so we were very grateful that so many people came to help!” says Bilyana Mladenova, the Bulgaria project coordinator. “It’s good to see that volunteering, something positive, is growing in Bulgaria. It’s something that FSCI works hard to promote and the Christmas box appeal definitely attracts people, they want to get involved. We’re also thrilled that an increasing number of Bulgarians are donating money to help cover the costs of shipping the Christmas boxes inside our country.”

FSCI is very grateful for all the support received for the Christmas box appeal. The presents were well received wherever they were distributed – your generosity has helped to spread joy to thousands, both young and old. Thank you!

You can see all the videos from the Christmas box distributions here.