A light in her eyes

Gabriela* used to hide away from the world. Life was tough at home, and she was deeply unhappy. What must the outside world be like, if home is this bad? At 12 years old, this girls’ thoughts travelled the darkest paths, towards suicide even.

For Polina, a therapist at Beginning of Life’s Psychological Art Studio in Chișinău, Moldova, Gabriela’s attendance of a special demonstration session was a chance to begin a process of slow transformation. “From the first day Gabriela appeared in therapy class, we observed she is nervous when someone look at her or take picture of her,” explains Polina. “And she told us about that very soon. Gabriela said that she does not like and avoids people, and that she thinks very often about death. We observed she preferred darker colours, not only in pictures she was drawing but also in most of her clothes. This girl was gloomy and closed to communication.” Gabriela was closed off, but the art therapy gave her a way to express herself in a way that allowed communication and opened the door for something new. 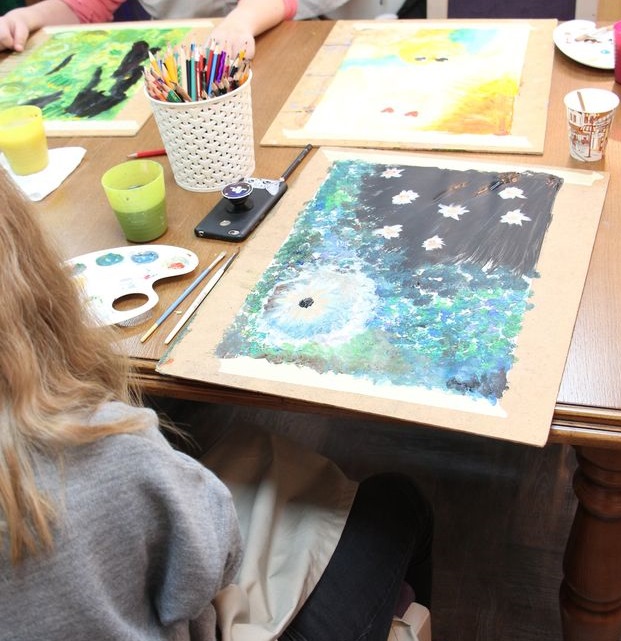 Being creative kept Gabriela coming back, and so Polina and the team were able to build a rapport with her. Polina continues, “In one of the lessons, the assignment was ‘Draw your mood’. I decided to intervene in the process and asked Gabriela the name of her dark new drawing. She responded, ‘I called it: Depression and Me’ (see photo). Then I asked her to add some other colours, or maybe make some changes in the drawing. And Gabriela tried to do that as much as possible. She added white flowers. When I asked her what they meant, she said ‘These are my dreams’”.

Little by little, Gabriela has intentionally begun to apply some colour to her life. Each week the team have been seeing evidence of a young life changing, gradually, but noticeably. Gabriela takes small, steps, looking to emphasise the good things around her, and learning to trust the team. Over the course of six months, Gabriela became a very different person. She smiles at people, hugs her classmates. Her drawings are now full of colour and light, and more and more detail. She encourages others in her class, as she was once encouraged.

“Now looking in her eyes I see light,” says Polina. “It is hard to say the changes are complete. Gabriela is still fighting her demons, but now she has people who help her with that. We hope that God’s grace will change her radically until full restoration.”

You can find out more about our partners in Moldova, Beginning of Life, and its art-therapy centre, among other things, here.