Greentrees dress down to help out

Greentrees Primary School held a non-uniform day on 11th March to raise funds to help Ukrainian refugees. The school has infants and junior sites in Salisbury and has been a long-term supporter of FSCI’s Christmas box appeal. The day was a great success, with a total of over £950 being raised! 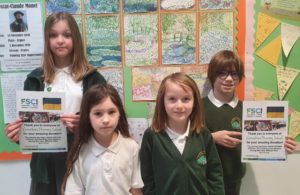 Greentrees Headteacher, Ray Picton explains that the school was eager to respond to the plight of Ukrainians fleeing the war. “Greentrees really wanted to help because supporting refugees was one way the school community could practically contribute. We particularly wanted to support the work of FCSI as it is a local charity that we have worked with closely over many years. We know any money raised will go those people most in need.”

“We’re really grateful to the pupils and families at Greentrees Primary School”, says Rich Parsons, FSCI (UK)’s Operations Manager. “They are directly helping our partners in Moldova as they bring practical aid to the increasing numbers of people crossing the border to escape the war in Ukraine, and who now face a difficult and uncertain future”.

Hundreds of thousands of refugees are fleeing to, and through, Moldova in a desperate attempt to escape the fighting in Ukraine. FSCI partners, Beginning of Life, have been engaged by the Moldovan government to help its response to the growing crisis.

Beginning of Life is liaising with local churches, organisations and private citizens to provide accommodation for families, with hundreds being placed daily. In addition, Beginning of Life is providing activities for children and young people, counselling and help with meals, and is assisting with transport needs from the border with Ukraine and supplying equipment and supplies so that teams can distribute snacks and hot drinks to refugees waiting at the border.

Moldova can ill afford such a crisis, and as the number of people needing help grows, resources are becoming stretched. If you would like to support the relief work now being carried out by Beginning of Life, you can make a Gift Aid-able donation via the link below.