Hope on the road of fear

FSCI’s partner in Moldova, Beginning of Life, has been working hard to support Ukrainian refugees escaping the war that is tearing their country apart. Here, one refugee tells the story of her family’s flight to safety.

“My name is Julia Radiko and not long ago I was living in Nikolayev, east of Odessa. I had my small bakery, which my husband and I opened not long ago. When the war started it was scary, but we decided to stay in our hometown and continue to work.

All these nights we were hiding in the basement of our apartment building. Still, we could keep up with situation, until on March 6 began three nights of very intensive bombing and we were told that army is coming to the city. I tried to leave the city in my car, but it broke down and we came back with my daughter.

But, on International Women’s Day, the bombing was so intense my husband forced me to leave the town. I took my daughter, two friends, and my younger sisters with their children, and we jumped into an evacuation bus toward Moldova. My husband remained in Nikolayev to keep house and bakery safe. We got to an enormous queue of cars and people. We walked around 12km with the children. It was windy, and so cold with the snow. Thousands of people were in front of us and behind us. It was shocking. I was asking myself, what I am doing here? What are we going to do after we get through the border? That day was a nightmare…

From some relatives we got a contact number in Chisinau, and we called without knowing what help we might get. But we were told that two cars will pick us up at the border. That day it was first good news for us. After hours of walking on a muddy road we got to the border and there we were picked up by some young men who drove us to Chisinau. 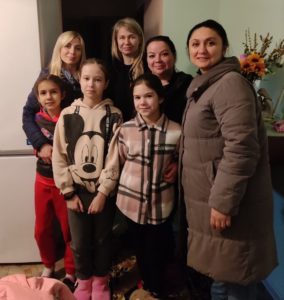 It was so strange, a man who we didn’t know met us in Chisinau, bought phone sim-cards, and provided a hot dinner in a local restaurant. We had many strange feelings and thoughts. Why are all these Moldovans at the restaurant, and not hiding in case bombing begins here too? We were taken to a summer camp site and after a while a house was found for our group of women and children, a place we could stay until the end of the war. We were given all what we needed from the bed linen to food and hygiene. I was even offered dental help when I began to have a very bad toothache.

I haven’t seen such people, and for us it was hard to understand why they were doing all this for us. After visiting a church service, I realised that God had arranged the way for us and provided these people to take care of us. I have not experienced such a thing as this!”

A couple days after sharing her story with the Beginning of Life team, Julia and two other mums with their children decided to go to Germany, as they were afraid that Moldova would be invaded too. No doubt the news that Julia’s bakery shop had been damaged by bombing will have been an unwelcome reminder of how close to the war she, her family and friends remained. Beginning of Life asked its contacts to help get the families to Germany. Julia has since written again.

“Thank you for helping us all the way through this journey. Here we are well accommodated and cared for, but not as it was in Moldova. Yesterday we decided to go to the local church. It was so peaceful and warm, and we stayed there until late at night. I am happy to know where to go when there is hardness in my heart…”

Donate to our Ukrainian Refugee Appeal