There is still hope

By FSCIAugust 2, 2022August 3rd, 2022House of Opportunity, Stories
No Comments

Sara’s life was full of darkness, and it nearly overwhelmed her. At the House of Opportunity, she can begin to imagine something different for herself.

Sara* never knew the love of a father. Her dad was a drunk, and his neglect of her meant that Sara was not really sad when her parents divorced. “Unfortunately, that’s when my hell started”, Sara shares. You see, her mother didn’t seem to love her either. So who could Sara go to when her mother’s new boyfriend began to abuse her? Mum simply didn’t want to hear or see what was happening.

Sara was often hungry, her basic needs neglected by day. Neighbours fed her often. Some neglect would have been welcome at night. At the age of 14, Sara started to experience panic attacks, developed depression and began self-harming. Then, deciding she couldn’t go on, she tried to end her own life. From that time on the psychiatric ward at the hospital became like a second home for her, and she got some help, at last. However, her mother still wouldn’t pay attention, seemingly devoted to Sara’s half-brother, who took every opportunity to belittle and insult her. Somehow, through all this Sara found a reason to keep going. 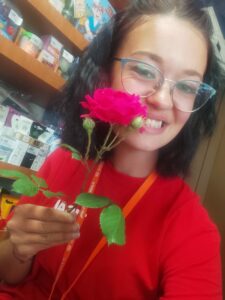 Sara struggled to finish her schooling, which she managed to do whilst staying on the psychiatric ward. Despite the fact that she had now developed epilepsy, Sara took the bold step of trying to live on her own. But it was so hard. Too hard. Then she heard about the House of Opportunity in Varaždin. Maybe this was a place that could provide her with what she needed. Or was it too good to be true? But really, what choice was there?

Sara hasn’t been in the House long, but she can already tell that things are different there. There is a lot for her to work through, but the House team are working with her, and helping her to get the best ongoing treatment she can, as well as putting in the time to just be with her and give her more reasons to keep going. Sara herself is far from sure, but she certainly hasn’t given up and told us “I believe there is still hope for me”. We believe it too.

*Name has been changed.