Ride Against the Traffic – Whatever the weather

Blake and Jeremy took on the elements during their epic cycle to Denmark.

Blake is used to challenges. After finishing at Southampton University, the Maths graduate joined FSCI’s UK team to help with the COVID-affected 2020 Christmas box appeal and helped to make it a success despite all the difficulties that had to be surmounted that year. One thing remained consistent throughout; rain or shine, Blake loved to ride his bicycle around Salisbury and beyond.

Blake and his friend Jeremy hatched a plan earlier this year to cycle to Copenhagen. Jeremy decided to raise money for cancer research, but with the trip coinciding with the first year of FSCI’s Ride Against the Traffic, Blake hooked up with a private sponsor for his time in the saddle!

The 16-day trip proved to just the sort of challenge the two friends were seeking. Blake told us, ”Over the 1,500kms we crossed six countries, popped six tyres, brushed off at least fifteen ticks and fell off our bikes seven times between the two of us. First time cleat-users!” 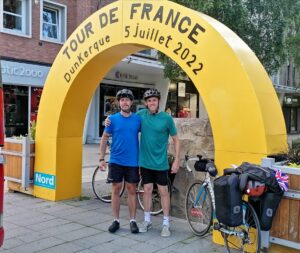 Holland proved to be every bit as good to cycle in as you would expect – apart from the weather. Blake reports, “The weather was interesting. We tried to follow the coastal route in the Netherlands, but the once favourable winds reversed into a 20 knot north easterly nightmare, which reduced us to a crawl, and a reroute to try and find some respite. Together with the odd heavy rainstorm, we didn’t quite get the summer conditions we were looking forward to. All part of the fun!”

Into Germany and the route, the heat, and the daily distances, became more challenging. By Hamburg the lads were struggling, but they met some Scandinavians who got them dreaming again, motivating them to push on north to their goal, Copenhagen and a well-deserved day off.

The adventure wasn’t quite over though. Their return flight to England arrived on the hottest day of the year, and the trains from Stanstead had melted away in the 40°C heat. Blake and Jeremy were forced to cycle on to Epping underground station where the final tube had already left, making their last night a sleep under canvas near the local cricket club.

Trips like these make unforgettable memories and opportunities for great encounters with other travellers. Blake really enjoyed his European odyssey and raised £800 for FSCI from the pedal powered journey. Why don’t you and some friends plan your own cycle trip and help FSCI to prevent modern slavery and human trafficking?

Find out how you could Ride Against the Traffic through your own adventure here. 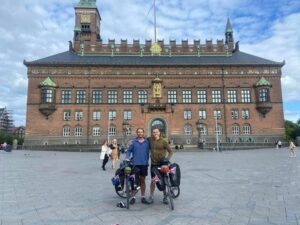