FSCI supporters will be looking to spread a bit of joy in war-stressed Southeast Europe this Christmas. 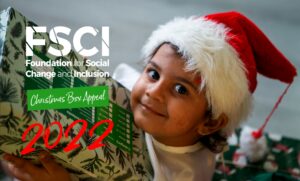 FSCI is running its annual Christmas box appeal again – and is anticipating a strong response despite the rising costs that are causing so much uncertainty in the UK. “It’s very hard to plan for the future at the moment”, says Rich Parsons, Operations Manager at FSCI (UK). “Inflation rates not seen for decades are a new experience for many of us, but we have no doubt that people will remain generous despite this. By early September over 100 schools, churches and businesses had signed up to take part in the appeal, which is very encouraging, and points to another successful year”.

Christmas boxes are simple presents put together by people in the UK. Each festive box is filled with small gifts such as soap, stationery, gloves, hats, toys and sweets. Last year, nearly 8,000 Christmas boxes were distributed to orphanages, poor Roma communities, women’s refuges, refugees, prisoner’s children, poor rural schools and isolated elderly or disabled people in Bulgaria. For many, this was the only Christmas gift that they received.

A few of last year’s boxes were distributed late and made their way to some of the earliest Ukrainian refugees that made it to Bulgaria in April. Director of FSCI Bulgaria, Tedi Koleva, thinks that this year’s appeal will be a blessing to refugees again. “The Christmas boxes are always highly appreciated, but I think this year, with the refugees from Ukraine still facing so much uncertainty, the presents will be warmly welcomed by a whole new group of people. Our Ukrainian friends are not a group that we ever expected to serve in this way – but we have been doing what we can, and this will be one part of our efforts to assist them. We are always amazed by the affect that the Christmas boxes have on people. I believe that for refugees, who are so far from home, these presents will really be very encouraging. Don’t dismiss the power of such gifts!”

Find out how you can join with the 2022 Christmas Box Appeal here.